DAY TRIP TO SANCHI BY CAR

Trip to Sanchi from Bhopal.

Pick up from your hotel in Bhopal and drive to Sanchi. Bhopal to Sanchi is 46 km and covers the distance in 1 hour 30 minutes by road. 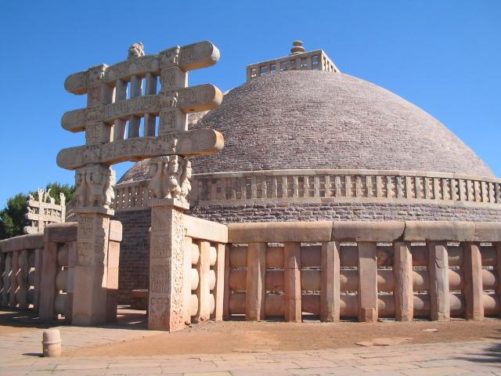 Places To See In SanchiSanchi Stupa: Sanchi Stupa is located at a small hill top in Sanchi town of the state of Madhya Pradesh in India. Sanchi is about 46 km from the capital city of M.P, Bhopal. Sanchi Stupa is a UNESCO world heritage site, a great Stupa that is the oldest stone structure in India. It is the great center of Buddhist art and architecture. The Stupa of Sanchi was commissioned by the great emperor Ashoka, built over the sacred relics of Buddha in 3rd century BCE in effort to honor and shelter them. The construction of Stupa was actually supervised by his wife Devi.When it comes to design of main structure of Stupa, It was a hemispherical structure built over the relics of Buddha, crowned by umbrella like structure that symbolizing high rank. The great Sanchi stupa refers to Stupa 1. Stupa 3, The Ashokan pillar, Temple 18 from Mauryan era and Temple 17 from Gupta era are the major attractions surround the Stupa 1. Brahmi inscriptions dating back to 3rd century BCE can still be seen, leading up to 800 CE.There are a number of other temples and monuments from the beginning from 3rd century BCE to 12th century CE laid out in the village of Sanchi. The great Sanchi Stupa is surrounded by four intricately carved gateways with showing events from Buddhaâ€™s life, built in the first century BC by Andhra and Satavahanas.Ashoka Pillar, Sanchi: The Ashoka pillar is located near to the southern gateway to the great Stupa No.1, which is popular for its exquisite beauty and unique structural balance. The pillar is intricately carved and shining with unique polish that still glitters. The pillar crown is placed in the museum.Buddhist Vihara, Sanchi Buddhist Vihara is an important site located close to Sanchi. The sacred relics are said to have found at Satdhara Stupa and enclosed in a galss casket in the inner sanctrum of this monastery in Buddhist Vihara, Sanchi.The Great Bowl, Sanchi It exhibits the huge bowl carved out of a single block stone that contained food. It was used to distribute food to the Buddhist monks living in Sanchi. The Great Bowl is said to have stored different kind of food items and distributed to monks of Sanchi.Gupta Temple, Sanchi It is one of the earliest known examples of Indian temple architecture. The Gupta Temple No.17 is an indicative of the revival of structural activity in Sanchi. It has made a prominent place for itself in history because it marks the genesis of temple Architecture in India.
13:00 Hrs.

You have an option to have Lunch at any good restaurant
14:00 Hrs.

After lunch , take a short drive to see Udaygiri caves near Vidisha. It is just 13 km from the Buddhist site of Sanchi.
14:30 Hrs

Udayagiri Caves: Udayagiri caves are basically a group of rock cut caves pertaining to an early Hindu ritual site located in the Vidisha district of Madhya Pradesh in India. These caves were sculpted and extensively carved during the reign of Chandragupta II from the Gupta dynesty between 4th and 5th centuary CE. Udayagiri caves consist of a substantial U shaped plateau next to the river Bes. This site is under the protection of Archaeological survey of India. Get in to see an Illustration of beautiful design of the entrance, the massive pillars and the artful faÃ§ade.Cave 5 is the most talked sculpture exhibits the figure of Vishnu in his incarnation as the board headed Varaha.Cave 4 has a unique monumental Shiva linga.At the entrance of the cave 6, it illustrates the monumental figure of seated Ganesha.Cave 12 consists of a monumental figure of standing Narasimha, Vishá¹‡u in his 'Lion-man' incarnation.Cave 13 illustrates the large figure of Narayaata, the recumbent figure of Vishstu resting
17: 00 Hrs

After the sightseeing of Sanchi drive back to Bhopal.

Arrives Bhopal. Upon arrival, drop at your hotel