Forts, Havelis, Palaces, Hunting Lodges and Castles of erstwhile rules are symbolic for Rajasthan. These properties were later on converted into hotels retaining the same charm and decor with extraordinary collection of antiques. Visit Rajasthan to stay at these magnificent Heritage Hotels and experience the impeccable tastes of the kings and noblemen.

Arriving Delhi, you will clear customs and immigration. Leaving the airport, you will be met by our representative, holding a placard with your name on it in the arrival lounge. Arrival transfer to hotel. Assistance for check-in will be provided. After check-in overnight at hotel. 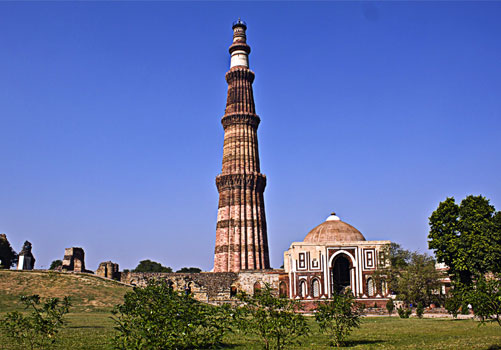 After breakfast full day city tour of Delhi which is India's bustling capital city. First of all visit India Gate which is a famous war memorial at the east end of Rajpath. Also visit Gandhi Smriti. The residence of industrialist BD Birla has been converted into a memorial to Mahatma Gandhi, where he used to stay during his visits to Delhi. Gandhiji was assassinated here on his way to offer customary evening prayers.Later on drive past President's House, Parliament House & Secretariat Building.

Later on visit Lotus Temple (Bahai Temple) which is the newest most extravagant architectural wonder of the Bahai faith, located in Kalkaji, south of Delhi. Then, visit the beautiful Akshardham temple. The grand, ancient-styled Swaminarayan Akshardham complex was built in only five years through the efforts of 11,000 artisans and BAPS volunteers.

In the afternoon Qutab Minar which is 72.5 m in height and has a mosque at the base. It is a magnificent structure whose construction started in 1199 by a Muslim King Qutab-ud-din Aibak (after whom it was named) and was finished by his heir IItutmish. Overnight at hotel. (Breakfast) 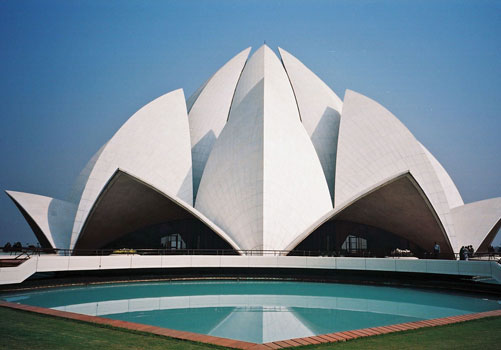 After breakfast check-out and drive to Agra. Arrive Agra and check-in into hotel. After check-invisit the sprawling Agra Red Fort which is surrounded by a 70 feet high wall.Later on visit Itmad-ud-daula which has a special place in the chronicles of both history as well as architecture. This is precisely because Itmad-ud-Daula is the very first tomb in India that is entirely made out of Marble. This is actually a mausoleum that overlooks the River Yamuna and is a tomb of Mir Ghiyas Beg, a minister in the court of Shah Jahan.

In the evening, head to Mehtab Garden for a unique view of the Taj Mahal from across the Yamuna river! Overnight at hotel. (Breakfast) 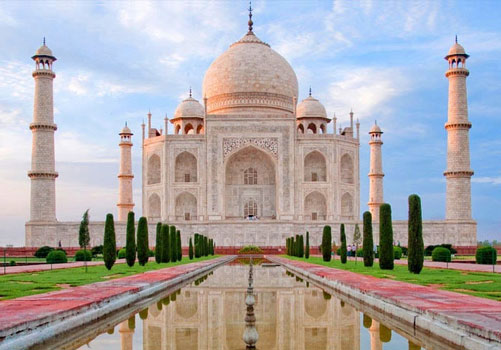 Early morning visit the Taj Mahal which is India's most fascinating and beautiful masterpiece. The Taj is most enthralling in the quietness of early morning. This glorious monument is at its best under the early morning sun. It is the best time to click pictures as not only is the light wonderful but it's relatively less crowded too. With the rising Sun the white marble changes its colour and hues and it is excellent for photography.After breakfast check-out from the hotel and drive to Jaipur. En-route visit Fatehpur Sikri - Built by Akbar the Great in the 16th century to serve as the capital of his vast empire, Fatehpur Sikri was mysteriously abandoned 13 years later.Arrive Jaipur and check-in into hotel. Rest of the day free to relax at your hotel. OR you can explore the local markets for souvinir shopping the Jaipur is famous for- Jewellery, precious stones, paintings, hand printed textiles etc. Overnight at hotel. (Breakfast)

After breakfast full day sightseeing of Jaipur which is an exuberance of color, dance, and song with the traditional arts and crafts. Morning we take you to Amer Fort - The royal family's residence at Amber is only 11 km away. Ascend on elephant back upto the hill on which the fort is situated.

Afternoon covering Hawa Mahal or "Palace of Winds," one of the major landmarks of Jaipur. The City Palace which is blend of Mughal and Rajasthani architecture and the royal family still lives in a part of the palace. Adjacent to the City Palace is Jantar Mantar, the ancient astronomical observatory built by Raja Jai Singh, whose passion for astronomy was even more notable than his prowess as a warrior.

In the late afternoon a visit to the colourful bazaar of Jaipur has been arranged. Here get your hands painted with Henna from roadside mehandiwalas (ladies that specialise in painting hands with Henna). In the evening we have arranged a dinner at Chokhi Dhani. A taste of the rustic Indian village is brought to you with all its charm. Other attractions are CAMEL RIDES,PUPPET SHOW, MAGICIAN, FORTUNE TELLER and VILLAGE CRAFTS. Overnight at hotel.(Breakfast/Dinner) 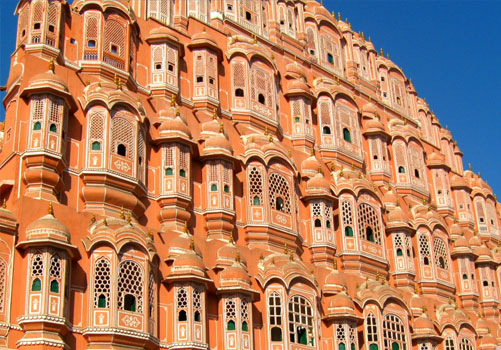 After breakfast check-out from the hotel and drive to Udaipur, the lovely lakeside capital of Mewar - The City of Dreams which is perhaps the most romantic city in Rajasthan. On arrival check-in into hotel. Rest of the day free to relax at your hotel. Overnight at hotel. (Breakfast) 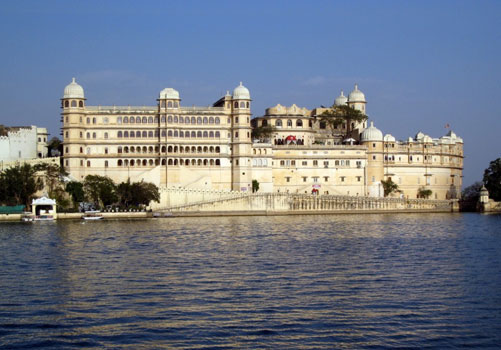 After breakfast we proceed on a tour of this "Lake City". Udaipur which is a cool oasis in the dry heart of Rajasthan. It is probably the most romantic city in a state where every city has some romantic or exotic tale to tell. Visit City Palace - the largest palace complex in Rajasthan. The huge city palace towering over the Lake Pichola is the largest palace complex in Rajasthan. Though it is a conglomeration of buildings built by successive rulers, it manages to retain a surprising uniformity of design and affords very fine view of the lake and the city from the upper terraces. Then, visit Jagdish Temple, 16th century temple dedicated to Lord Vishnu. We'll drive past Fateh Sagar Lake with a visit to Sahelion-ki- Bari, garden of the maids-of-Honor. Also visit Pratap Memorial, Atop the Moti Magri or pearl hill, overlooking the Fateh Sagar lake is the memorial of the Rajput hero Maharana Pratap with a bronze statue of the Maharana.

In the evening we have arrange a boat ride on the Lake Pichola which is one of the prime attractions of Udaipur. The lake is known for the palace build amidst the lake. The lake was built by Maharana Udai Singh II. The beauty of the lake and its surroundings can only be felt by seeing it, which increases many folds during sunrise and sunset. Overnight at hotel. (Breakfast)

After breakfast check-out from the hotel and drive to Ranakpur. Visit Ranakpur Jain Temples complex, one of the biggest and the most important cluster of Jain temples in India.

Later on continue drive to Kumbhalgarh. On arrival check-in into hotel. After check-in visit Kumbhalgarh Fort, the impregnable stronghold of the Rajputs Kumbhalgarh fort towers much ahead of its contemporary citadels in its elegance and structural brilliance. Overnight at hotel. (Breakfast) 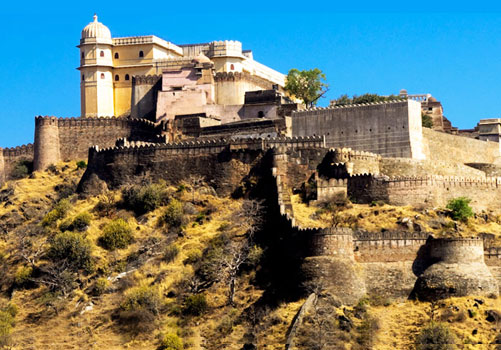 After breakfast check-out from the hotel and drive to Jodhpur - The Desert enchantment. Arrive Jodhpur and check-in into hotel.

After check-in enjoy half day city sightseeing of Jodhpur city which is the second largest city of Rajasthan and a major tourist attraction in the country. Covering Mehrangarh fort which is one of the largest forts in India. The fort has been a witness to the Mehrangarh Fort, Jodhpursplendour of a bygone era. Also visit Jaswanthada - The 19th century royal cenotaph and the museum located in the Umaid public gardens.

In the late afternoon visit Umaid Bhawan Palace. A part of Umaid Bhawan Palace houses a well-maintained museum, displaying an amazing array of items belonging to the Maharaja and the royal family - weapons, antiques & fascinating clocks, crockery and trophies. Overnight at hotel. (Breakfast)

After breakfastcheck-out from the hotel and drive to Jaisalmer - The Citadel City. On the way we pass camel carts, vibrant and colorful Rajasthani women carrying produce to the market, and men sporting brightly colored turbans usually sitting groups just passing the time of the day.

On arrival check in into hotel. Rest of the day free to relax at your hotel. OR you can explore the local markets for shopping. Overnight at hotel. (Breakfast) 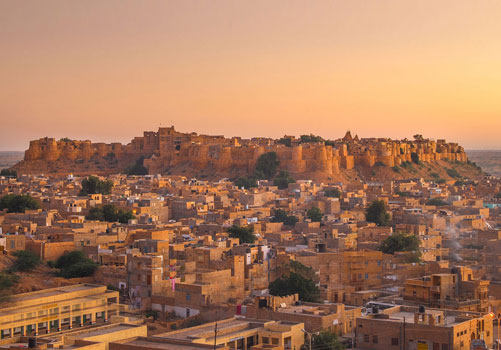 After an early breakfast start to explore Jaisalmer, much of which still remains inside the walls of the fort. Everywhere you go, the Jaisalmer is ever present and adds a wonderful warmth to the place, even though it's already in the desert! We will show you the palace inside the fort and the Jain temple. Later on take a guided walk around the old city where there are many havelis, all adorned with fine carvings in the local stone. The complexity of the lattice work - all hand-carved is sometimes defies belief.

In the late afternoon we have arranged Sunset camel ride to the Sam Sand Dunes. A trip to Jaisalmer is in incomplete without this visit to most panoramic Dunes of Sam, where the wind is unceasingly carving out scenic patterns on this desert sand. Overnight at hotel. (Breakfast)

After breakfast, check-out from the hotel and drive to Bikaner. On arrival check-in into hotel. After check-in enjoy half day city tour of Bikaner - the camel city. Visit Junagadh Fort - Built in 1593 A.D. by Raja Rai Singh, a general in the army of Emperor Akbar, the fort is a formidable structure encircled by a moat and has some beautiful palaces within. Also visit Bhandeshwar Jain Temple - Beautiful 16th century Jain temples, dedicated to the 23rd Tirthankar Parshvanathji. Overnight at hotel. (Breakfast) 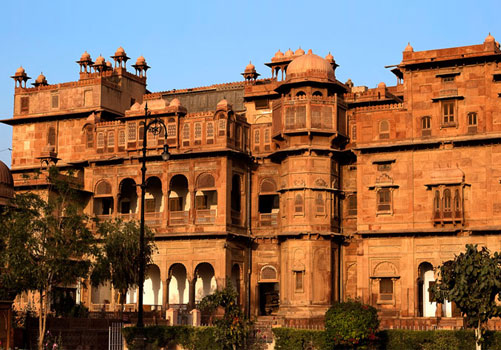 After breakfast check-out from the hotel and drive Mandawa which is which is known for its famous mansions and havelis. Arrive Mandawa and check-in into hotel Heritage Mandawa.

In the afternoon take a walking tour of the painted 'havelis' of some of the leading business families of the country. Though they no longer live here, the local caretakers are happy to show the visitors around. En-route you can shop for the colorful art and crafts of Rajasthan: tied and dyed textiles, metal handicrafts, carved wooden artefacts and more. Visit painted havelis & mansions. Also visit Mandawa Town for capturing the rural life in your camera. Overnight at hotel.(Breakfast) 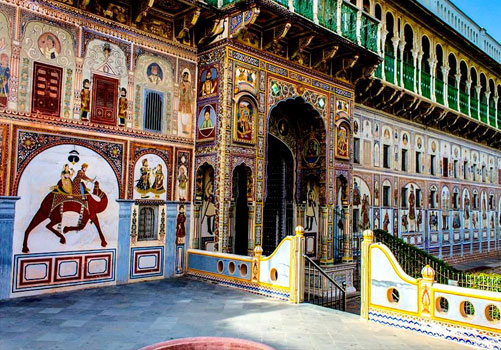 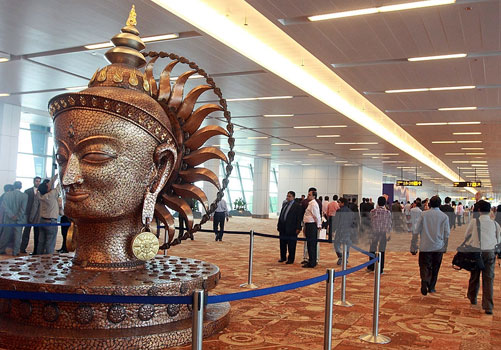 – International/domestic Airfare. – Meals and beverages not listed in itinerary. -Movie/video camera fee at monuments. – Tips and gratuities. -Expenses of personal nature like laundry, telephone calls, portage etc. – Any other service that has not been included into “cost inclusions”.

Talk to our Team Leader

Our team of experts can help answer any questions you might have. Write to us or Make a Skype Call. On average we provide quotes within 6 hours during business hours and the next day during off business hours

You can even talk directly to our CEO who will look after all your travel requirements personally until your travel plan is crafted to match your preferences.